The Champlain Saint-Lambert Cavaliers took home top accolades in Men’s Soccer as Zakaria Bahous was named a CCAA All-Canadian and Player of the Year and Mauro Di Ciocco was awarded the CCAA’s Coach of the Year for the 2021-22 season. 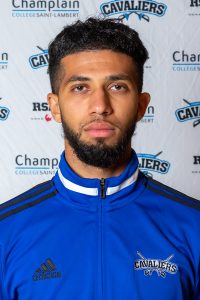 Zakaria Bahous was honoured during the 2021 CCAA Men’s Soccer National Championship, hosted by the Southern Alberta Institute of Technology (SAIT) in Calgary, AB.

“Zakaria had an incredible year with the Cavaliers Men’s Soccer program this season,” said Alan Rogan, acting CCAA Men’s Soccer Convenor. “It is apparent that he is well respected by his teammates, the coaching staff, and in the community, which makes him a worthy recipient of this prestigious CCAA award.”

Bahous, the Cavaliers’ captain, is the heartbeat of the team. The third-year midfielder led the Réseau du sport étudiant du Québec (RSEQ) with 10 goals in nine games. Champlain Saint-Lambert went 7-1-2 and finished third in the always competitive conference.

At Champlain Saint-Lambert, Bahous has matured and grown into a leader of the team, both on and off the pitch. The RSEQ Player of the Year demands nothing but the best from himself and sets a high standard with his teammates.

He has also given back to the community, where he coached youth soccer at a local club. Bahous also co-started his own health and fitness start-up through a social media platform, helping young athletes build positive nutrition and training habits.

“Having watched Zak grow, not only as a player but as a student and leader, has been part of an amazing journey over the past few years,” said Vince Amato, Coordinator of Athletics at Champlain Saint-Lambert. “Seeing what he brings to the team and the program epitomizes the idea of being a student-athlete.” 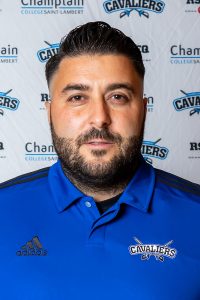 The team faced many challenges this season that were dealt with head-on by Di Ciocco. The Cavaliers rostered only five players who had ever suited up in a college game prior to this season. He quickly built a sense of community with the team and created a team culture in an academic milieu.

His squad also led the RSEQ with the lowest number of cards and they were awarded the Fairplay and Sportsmanship Award for the 2021-22 season.

Di Ciocco assisted his players in improving and maturing as student-athletes, as well as citizens. He promotes and fosters a sense of togetherness within the team. Mauro has created a safe environment at Champlain Saint-Lambert for student-athletes to be able to contribute within their abilities while allowing them to continue to strive for excellence.

He also works with the team off the field in numerous ways to ensure the holistic development of the players.

“As an alumnus of Champlain Saint-Lambert and the Cavaliers’ Men’s Soccer program, Mauro not only understands the game but what our goals are in regards to the student-athlete experience and student success,” said Vince Amato, Coordinator of Athletics at Champlain Saint-Lambert. “He’s able to connect with the students and get the most out of them, as can be seen with the team’s on-field success and their success in the classroom.”

Congratulations to both Zak and Mauro for rising to the top and showcasing everything that we do here at Champlain Saint-Lambert!