In front of close to 600 fans, the Champlain Saint-Lambert Cavaliers Women’s Basketball team won their first Provincial RSEQ Championship over Dawson 69-64 and locked in a top seed at the 2022 CCAA nationals that are being hosted by Vancouver Island University from March 25-27, 2022 in Nanaimo, BC. 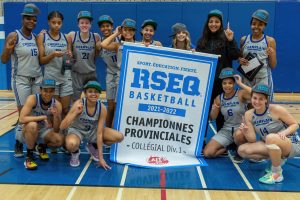 The Cavaliers started out strong, playing with confidence and control, jumping off to a quick start. At the end of the first quarter, Champlain held the lead, 22-13. Dawson came back hard in the second quarter, cutting the Cavaliers’ lead to four at half-time, 40-36.

The second half saw the Blues push even harder, closing to within two points at times, but they were never able to draw even with the Cavaliers, who countered every Dawson basket with a basket of their own, resulting in their 69-64 win and their first-ever RSEQ Championship.

RSEQ Championship all-stars will be named next week by the RSEQ with Ntaconayigize named the Championship MVP for her outstanding play over the week. 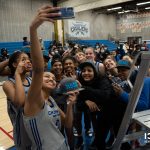 Road to the Gold

The #1 ranked Cavaliers secured their place in the RSEQ semi-final against #4 ranked Vanier on Sunday, March 13th, a game in which the winners would become one of Quebec’s wildcards for the national championships. The Cavaliers came out stronger and held a commanding lead after the 3rd quarter, eventually winning the game, and a ticket to the nationals, by a score of 74-58.

Despite having secured a spot at the nationals, the team was focused on winning the elusive gold medal and provincial title over the Dawson Blues. The Blues had given the Cavaliers their only loss of the season back in November, and the last time these two teams had met in a provincial final was back in 2018 when the Blues prevailed.

The Cavaliers were looking for their first victory over Dawson since March of 2015 when the ladies took home their first-ever provincial medal in the Bronze final of that year.

The win was Champlain’s first for the Women’s D1 Basketball program which joined the leagues back in 2007. Since 2015, the team has won two provincial bronze medals (2015 and 2020) and one provincial silver (2019), earning them a spot as one of the top programs in Quebec.

The team is looking forward to heading to Vancouver Island University, in Nanaimo, British Columbia for this year’s CCAA Nationals – the first CCAA National Basketball Championships since 2019 – and taking their game to the next level. The Cavaleirs will go up againt the NAIT Ooks in their opening game on Friday afternoon. Tip-off is 1:00 PM Pacific / 4:00 PM Eastern. All games will be webcast on the CCAA website: CCAA Championship Webcasts