The scene was a familiar one – a championship final between the Champlain Saint-Lambert Cavaliers and 9-time CCAA Nationals champions, Les Élans de Garneau. These two teams had met in the 2017 at the RSEQ Provincial Finals and in the 2017 CCAA National Championship. In both those cases, the Cavaliers ended up with the silver medal – losing each game by one goal. The 2018 RSEQ Provincial finals saw the same match-up and unfortunately, the same result for the Cavaliers, a 2-1 loss in the gold medal game to Garneau. With the RSEQ Conference being so dominant in Women’s Soccer, both teams from the finals once again had a berth to the Nationals and with that the belief that Garneau and Champlain would face-off for gold in Coquitlam, BC.

As the RSEQ Wild-Card team, the Cavaliers were seeded 3rd in their pool with the PACWEST (British Columbia) Champs, Vancouver Island University, the ACAC (Alberta) Champs, Northern Institute of Technology and the ACAA (Atlantic) Champs from Mount Saint Vincent University. 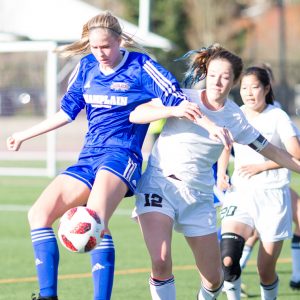 Round 1
Champlain’s first challenger was the VIU Mariners and the RSEQ runners-up defeated the PACWEST gold medalists in the quarterfinal round thanks to some excellent build-up play.

Throughout the match, the Cavaliers did an excellent job of using a combination of skill on the ball and perfectly weighted passes to make their way up field, creating chances and earning corners. One such corner was headed in by Kaliane Arpin-Gaba just 5 minutes into the match, setting the tone for the remainder of the game. A beautiful strike from Noemi Paquin doubled the Cavaliers lead before the break. Champlain continued to press in the second half, eventually earning a third as Paquin’s great run down the left side led to a Thalia Krauth-Ibarz insurance marker.

The Mariners pulled a goal back with a quarter of an hour to play as they got past the lone defender and slotted one home. The next 15 minutes saw the Mariners go all-out to tie the game, but despite an incredible effort and some huge chances, the Cavaliers were able to see out their 3-1 lead to the final whistle. Player of the Game honours went to Noémi Paquin from the Cavaliers. 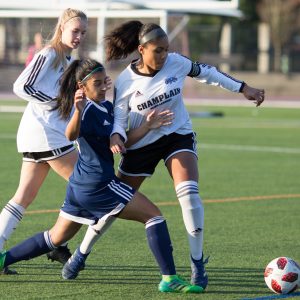 Round 2
The Cavaliers would now go up against the ACAC Champions, the NAIT Ooks from Edmonton, AB in the semi-final matchup. The Cavaliers were the stronger team in the opening minutes, but didn’t break through until the Ooks inadvertently handled the ball in their penalty area, and the resulting spot-kick was converted by Fréderique St-Jean to give Champlain St-Lambert the lead.

The Cavaliers continued to dominate the pace of play and executed a beautiful give-and-go play between Paquin and Krauth-Ibarz, which Paquin finished to double the lead. Just before the halftime whistle, 2018 CCAA All-Canadian Karima Lemire made it three goals for Champlain with a great run from the left-hand side, putting herself in position to calmly roll the ball into the goal.

The Ooks flipped a switch in the second half, immediately dominating the play for the entirety of the back 45. Just 5 minutes into the half, they converted a penalty of their own, and continued to press until an incredible free-kick goal drew the Ooks to within one. With 5 minutes of regulation and 4 minutes of stoppage time, the Ooks threw everything they had towards the Champlain goal, but the Cavaliers stood tall in the final moments to preserve a 3-2 win and advance to the gold medal game.

The Cavaliers’ Mathilde Lefebvre Lalande was named Player of the Game for Champlain. 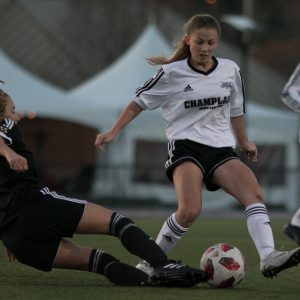 Gold Medal Matchup
With 13 games in the books and an excellent tournament to date, the gold medal match-up between les Élans de Garneau and the Champlain St-Lambert Cavaliers would prove to be a fitting finale for the competition.

The first goal of the game was scored by Olga Massombo, who would go onto be named tournament MVP. A corner kick bounced around in the box before landing in front of Massombo, who emphatically fired it into the roof of the goal. Les Élans responded almost instantly, scoring in the next minute on a misplayed a cross into the box and Garneau pounced on the loose ball to tie the game at one.

After the two-minute flurry of action, the pace of play settled down for the remainder of the half as the teams seemed happy to return to the dressing rooms with the score tied at one.

In the 57th minute, the Cavaliers regained the lead as Krauth-Ibarz helped on a through ball into the box. Again, les Élans would respond with a penalty in the 64th minute that was converted to once again tie the game.

The crowd seemed to have accepted that 30 minutes of extra time would be necessary to decide a champion. With less than 2 minutes left in regulation time, Krauth-Ibarz team found the back of Garneau’s net and made history for the Cavaliers and the College. The late tie-breaking goal lifted the Cavaliers to a 3-2 victory over les Élans and their first every Canadian Collegiate Athletic Association’s National Championship. and ending the 4-year championship streak of Garneau.

Player of the Game for Champlain was Thalia Krauth-Ibarz for her two goals, including the late game winner.

The win is Champlain Saint-Lambert’s first National Championship title for any women’s team and its second national championship in all sports. The Women’s team has appeared in two national finals and brought home hardware in both – Silver in 2017 and Gold in 2018.

Congratulations to all the student-athletes on this tremendous accomplishment and for making some history for the Cavaliers and the College. Congrats and thanks to the coaching staff – Kryz Kmiecik, Val Rosenoff and Frank Dépatie for their dedication and hard work to the team and the program.