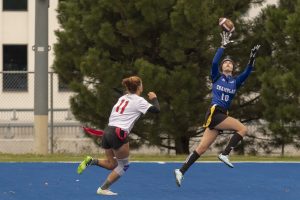 The Champlain Saint-Lambert Cavaliers have completed their first season in the RSEQ Women’s Flag Football league and have made it a memorable one. The team, which joined the Sud-Ouest league in Section D back in August, had an undefeated regular season, going 10-0 and outscoring their opponents 444-64.

Their first place finish ensured them a play-off berth in early November and their winning ways continued. The Cavaliers defeated Outaouais 33-0 in their semi-final game and then went on to win the Championship game by a score of 60-0 over Brébeuf.

The success of the season ensures that the team will move up at least to Section C for the 2019-20 season. However, with such a strong showing this year, there is hope that the team will be able to jump into Section B. A decision on this will be made by the members of the league if the Cavaliers decide to pursue this option with a request to move to the higher section for 2019-20. The team will be taking part in winter tournaments and training in their off-season.

Congratulations to all the student-athletes on the team for their dedication and motivation this past season! Thanks also goes out to coaches Alexandre David and Alexis Gaumont for their hard work and the time they invested in the team and Cavalier program!