The Champlain Saint-Lambert Cavaliers made a little history this past weekend as for the first time, both Men’s & Women’s Soccer teams won their respective Provincial Championships. Both teams had an incredible weekend, with neither team allowing a goal in regulation time and both teams winning at least one of their matches in shootouts. The wins propel the Cavaliers to the Canadian Collegiate Athletic Association’s National Championships in early November, with the women traveling to Edmonton, Alberta and the men heading down the 401 to Oshawa, Ontario. 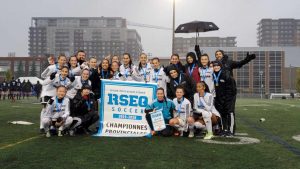 Women’s Soccer Heading to 3rd Consecutive CCAA Championship
The Cavaliers are heading to the 3rd national championship in three years – this time as defending champions. After losing in 2017 in the title match, the Cavaliers captured their first National gold medal last year in BC. Entering the RSEQ D1 Provincial Championship as the #1 seed, the Cavaliers, who had never won a Provincial title, went up against #4 Ahuntsic in the first semi-final on Saturday at Collège Montmorency under a beautiful blue sky. With both teams playing cautiously, unwilling to make any mistakes, scoring chances were few. Both keepers made key saves and the Cavaliers and their keeper, Kelly Cantin, got a huge break when Ahuntsic hit the crossbar late in overtime. In the ensuing shootout, it took 7 shooters for the Cavaliers to come out with the 1-0 (4-3) win.

The Gold Medal game on Sunday saw the Cavaliers go up against Les Dynmaiques de Sainte-Foy, a team that had given the Cavs trouble during the season. The Cavs had tied and lost to Ste-Foy and they were out to capture their first RSEQ title and get the #1 seed for the nationals. On a saturated field and under unrelenting rain, the Cavaliers played a solid game, controlling the tempo and moving the ball well, despite the conditions. In the 35th-minute RSEQ Player of the Year, Noémie Paquin, lofted a ball from 25-yards out, over the keeper and put the Cavaliers into a lead that they would never relinquish.  The Cavaliers sealed the deal with a goal in extra time, scored by Laurie-Ann Moïse, the RSEQ Rookie of the Year.

The win was Champlain’s first for the Women’s D1 Soccer program which has been on the upswing for the past 5 years. With a few silver and bronze medals from RSEQ championships, the Cavaliers were happy to finally capture that elusive gold and are now looking forward to defending their CCAA title in the 2019 CCAA Nationals being hosted by Concordia University of Edmonton from November 6-9. All games will be webcast on the CCAA website: www.ccaa.ca/wsoc/championship 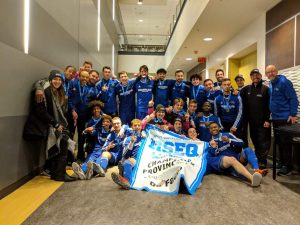 Men’s Soccer Knocks Out #1 & #2 in RSEQ as they Return to CCAA Nationals
The road to gold for the Cavaliers’ Men’s squad was not an easy one. With their 4th place finish in the regular season, the Cavs had earned a play-off berth but were required to play in the Provincial 1/4-finals on Oct. 22. The Cavaliers dispatched the Dynamiques from Sainte-For by a score of 6-3 and were now set to go against #1 seeded Ahuntsic in the RSEQ semi-finals at Montmorency. The Cavs, who had dropped at tight 2-1 match to Ahuntsic during the season, played a strong defensive game, allowing Ahuntsic only 10 shots (only 3 of which required saves). The Cavaliers’ offense created chances and it paid off in the 20th minute as Olivier d’Anjou took advantage of a rebound to net the only marker of the match. The win propelled the Cavaliers to the gold medal game, the team’s first appearance in the finals since 2011.

Going up against host and the #2 seeded Nomades de Montmorency for the gold, the Cavaliers were once again facing an opponent who had defeated them in the season opener. With the weather deteriorating, the teams battled back and forth. Cavaliers keeper Olivier Rouleau camp up big with huge saves to keep Champlain in the game, while the offense did its best to generate scoring in the rough conditions. Both teams were unable to score in regulation time and the 30-minute overtime saw no resolution. The shootout saw the first Montmorency player go wide and miss the net. Both teams scored on successive shots but Montmorency’s 5th shot was brilliantly saved by Rouleau. Champlain’s Jared Leheta, the RSEQ Player of the Year, buried his shot and gave the Cavaliers the win.

The Cavaliers return to the CCAA Nationals for the first time since 2015, when Champlain hosted the competition and finished 4th. The team is looking to capture their 2nd CCAA title and add to the one they capture in 2007. The Cavaliers will be looking for gold as they head to Oshawa and Durham College for the CCAA Nationals that will be contested from Nov. 6-9.  All games will be webcast on the CCAA website: www.ccaa.ca/msoc/championship

Good luck to all the student-athletes, coaches and staff! #CavsBlueTide #CavaliersPride