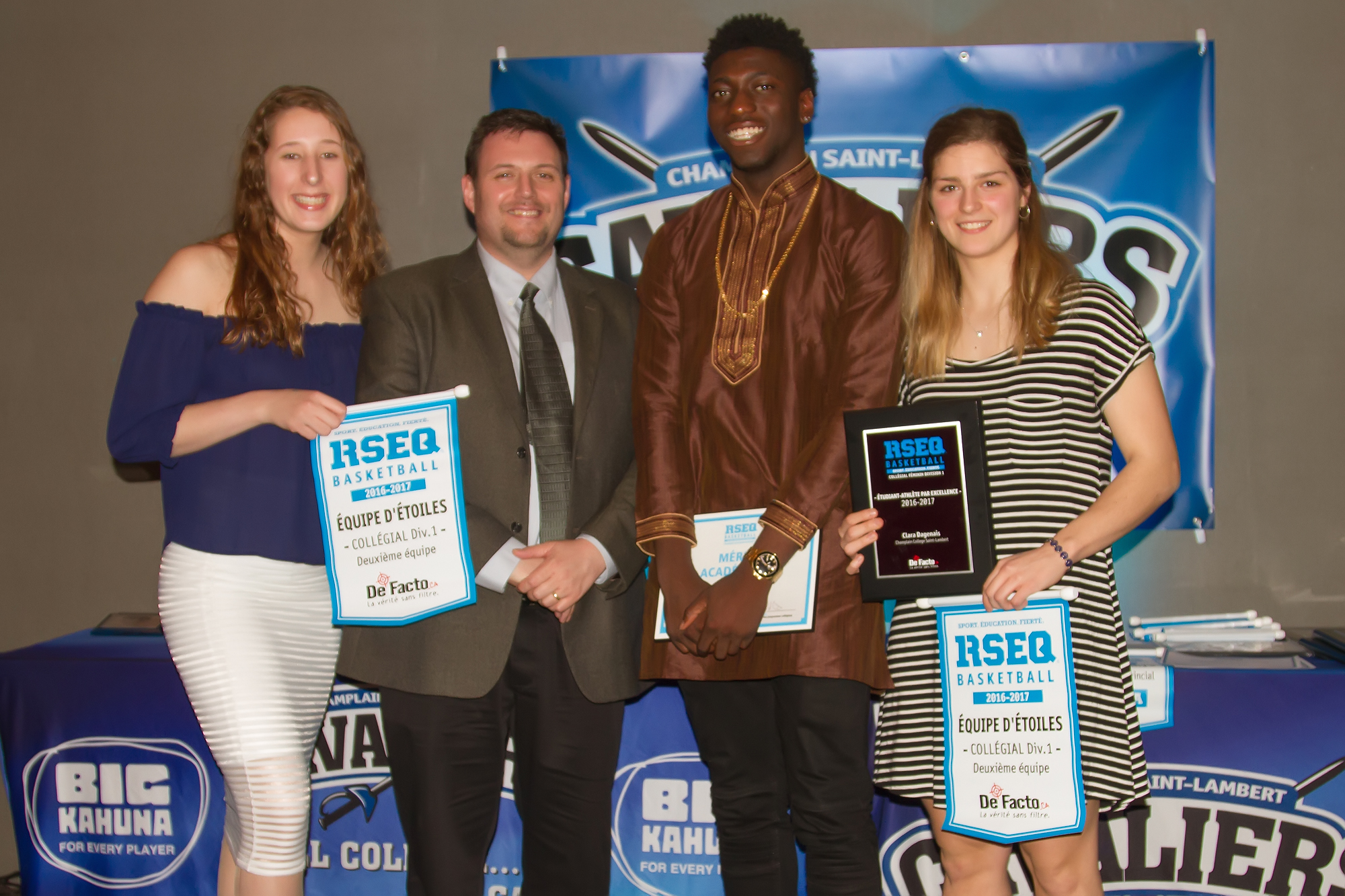 Continuing with their new Friday night tradition, the Champlain Cavaliers held their annual Athletics Banquet on April 21st at the Sandman Hotel in Longueuil, bringing their 2016-17 seasons to an official close with an evening of celebration. Over 200 student-athletes from the Cavaliers’ 11 teams were in attendance, joined by Campus Director Don Shewan, in addition to the coaches, assistants, academic coaches and Athletic Therapy staff.

56 team awards were handed out, including awards for Academic Excellence, Most Valuable Athlete, Most Improved Athlete, the Unsung Hero Award and the new Athletic Leadership Award, who’s recipients were selected by their teammates. In addition, the Cavaliers recognized the student-athletes named to their respective all-star teams as well as those recognized as CCAA Academic All-Canadians, RSEQ Academic-All-Stars, and graduating Cavaliers while honoring those who have maintained and 80% or above average during their years as a Cavalier. A complete list of award winners can be found at the bottom of this story.

Ilyas Kurbanov, a supporting member of the Men’s Basketball team and graduating Sport Marketing & Management student was awarded the Cavaliers Athletic Shield, presented annually in appreciation and recognition to someone who has made an outstanding contribution to the Champlain Cavaliers Athletic’s program. Ilyas, who’s been heavily involved as a volunteer in athletics, was a key member with his help when the college hosted the 2015 CCAA Men’s Soccer National Championship in November of that year.

The 2016-17 Female Athlete of the Year nominees were Karima Lemire (Women’s Soccer), Clara Dagenais (Women’s Basketball) and Mahalia Robinson (Women’s Rugby), with Dagenais taking the award for this past year. Clara was named an RSEQ All-Star as well as the RSEQ Student-Athlete of the Year for having the highest academic average in the Division 1 league. She was also named and Academic All-Canadian, in addition to being her team’s MVP for the season. Clara has been a well-respected leader on her team and we look forward to seeing her continue her career at university!

Nominees for the Male Athlete of the year included Christopher Rose (Men’s Soccer), Conor Sinclair (Football) and Andrew Richa (Men’s Rugby). RSEQ Offensive All-Star and RSEQ Offensive Player of the Year, Conor Sinclair, was named the winner for 2016-17. Leading his team to a perfect 8-0 in the regular season, Conor demonstrated his value on the field of play as well as in the locker room where he stood out as a leader,

The team with the best academic average was the Cross-Country Running team, passing 99% of all their classes taken with a team average of 82% while the award for the Graduating Cavalier with the highest academic standing was presented to Clara Dagenais from the Women’s Basketball team with an unbelievable 97% average!

Images from the evening can be found at champlainphotos.com.

RSEQ Scholar Athletes
The RSEQ honors its student athletes who have an 80% or higher average over their last two full semesters while they compete as student-athletes at their colleges. The following student-athletes have done so over the Winter 2016 and Fall 2016 semesters.

Graduating Cavaliers
Over 70 Cavaliers will be graduating this year. Students “With Distinction” are graduating students who have attained and maintained an 80%+ over their playing careers.