The 2019-20 RSEQ Division 1 Soccer All-Stars have been named and the Cavaliers have taken some of the top awards. 7 Cavaliers from the men’s & women’s soccer team were named all-stars for the year.

On the ladies side, the Cavaliers went 5-1-2 on the regular season and captured 1st place overall – a first for the program. The team was led by All-Stars Olivia Mazzarello, Noémi Paquin, and Frédérique St-Jean.

The men, who finished 4th with a 4-2-2 record, lead the league in scoring. Jared Leheta was the Cavaliers’ All-Star for the year.

Oliver d’Anjou was the men’s Academic All-Star, while Stefanie Kouzas earned the for the women’s squad. This award is presented to the student-athlete who has highest R-Score on their team. 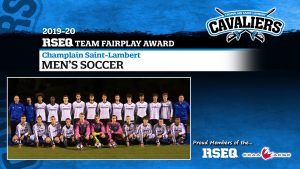 The men’s team was also selected through league voting as the Fairplay Award winners for the year. The award is presented to the team that best exemplifies the values and qualities of sportsmanship in competition.

First year student-athlete Laurie-Ann Moïse was selected as the Rookie of the Year for her breakout season where she finished 3rd overall in scoring with 4 goals in 8 games.

Player of the Year awards went to Noémi Paquin and Jared Leheta from the women’s and men’s teams respectively. Paquin had an amazing season where she scored 8 goals in 7 games (2nd in league), while Leheta lead the men’s league with scoring, having netted 8 goals in 8 games.  It is a first for the Cavaliers to have both Male & Female Players of the Year named in the same year.

Congratulations to all the winners and good luck in the Provincial finals!